And let us consider how we may spur one another on toward love and good deeds, not giving up meeting together, as some are in the habit of doing, but encouraging one another—and all the more as you see the Day approaching. Hebrews 10:24-25

I had so many plans to get involved when I started my freshman year of college. I wanted to be a part of a campus event planning club, I wanted to write for the newspaper, I wanted to apply for hall council in my dorm, and the list goes on and on and on…

After some investigating, all of those preconceived plans fell through, and I was worried about my future on campus. All of the pamphlets I found shoved under the door of my dorm listed “Get Involved” as a catalyst for just about any scholarship, program, or sense of fulfillment, and I didn’t want to end up living in a box just because I didn’t join student government. I was used to having a place to go, to feeling included, so this struggle to find a place shook me up quite a bit. I went from being a varsity cheerleader, Editor in Chief of the yearbook, and having my name tacked on to an endless list of clubs in high school to basically nothing. The only thing I felt connected to in my first few weeks of college was my status as an honors student, and I felt pretty pathetic.

The day before the first day of classes I bought myself a new Bible. All of the others I had were worn out, sitting on a bookshelf back at home, and I wanted a fresh start. As soon as I returned from Barnes and Noble, I started flipping through the New Testament, and ended up on this verse in James:

I’ll never forget that verse for two reasons. 1) Because it was the first verse I ever underlined in that Bible, and 2) because it became a reminder to me in those first weeks of college that life was changing drastically, and it may not always be easy, but that God’s plan was greater than anything I had in mind.

So, I pressed on, just being an honors student until I found something that clicked.

And then I found The Vine.

Well, I’ll rephrase, I knew about The Vine previously because it is an arm of the church I started attending last summer, but I didn’t realize how impactful and transforming it would be for me during my freshman year.

The Vine is a student ministry that meets on Missouri State’s campus every week. We fill up Carrington Hall on Wednesday nights, worship Jesus, and learn about the Bible. It’s a place where you can come to forget about your homework for a few hours, a place to make new, wonderful friends, but, most importantly, it’s a place you can come to walk with Christ during a pivotal time in your life.

College is a life-changer for anyone. Some people have moved hours away from their families, some are living on their own for the first time, but everyone has the freedom to make their own choices.

Personally, I didn’t want to be in the business of making bad decisions, of partying and drinking all the time and giving myself opportunities to royally screw up. That’s just not me. Thankfully, this ministry gave me friends and mentors that held me accountable, whether it was a face-to-face conversation or a message that hit me during our lessons. I was guided down a path that I wanted to be on, and I learned so much about myself, about living for Christ, and about Jesus himself. And it’s only been one school year.

The sense of unity and acceptance I feel every time I’m with those people is indescribable. After I joined a small group during second semester, I felt like I had extended my family. My walls came down countless times for that group, and they made me feel loved no matter what. We laughed, cried, and supported each other, and it made my second semester of college a complete joy after a rough first semester. (If you end up in that place, read this). 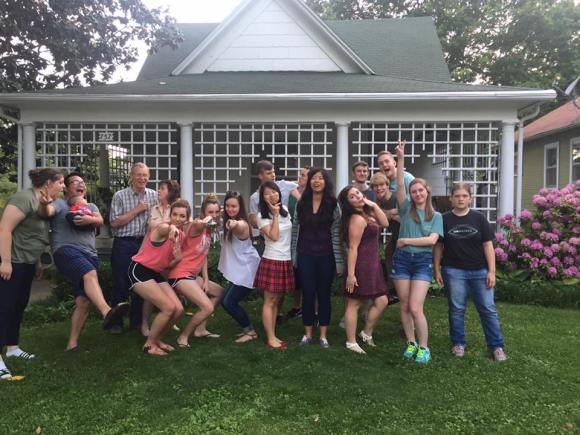 This ministry gave me hope, it gave me something to look forward to in the middle of a rough week, it gave me a community of people who are steadfast in their love of the Lord, and for that I am eternally grateful. There were days I would be walking around campus alone, and I’d look down and see “The Vine Wednesdays @ 7:30 Carrington Hall!” written in chalk on the sidewalk, and even something that minuscule could turn my day around. There were other times that I’d be on my way to class, and I’d see someone from my small group walking too, and I instantly had a buddy. It didn’t matter where I was or what I was doing, this ministry was always there, and present, and willing to help anyone.

If you’re about to start college, or you’re heading back to campus after the summer, I cannot stress enough how life-changing it is to find a community of people who have your best interests in mind. Join a ministry, or at least try some out. I can speak from the inside of one and say that we LOVE when new people walk in the door. Nobody is there to judge you, nobody is there to make you feel inferior, and nobody is there to exclude you. When you see that chalk writing on the sidewalk, I pray that you, whoever you are, take a leap of faith and venture into a service one night. God is always working in your life, and I hope that you learn to see that as clearly as I did during my freshman year.

Community is important. Community holds you accountable, makes the hard times easier, and will encourage you to live for the Lord. God doesn’t want to see you try to make it through this life by yourself. Reach out to people, and if you see someone who needs a friend, be that friend. It tells us to in the Bible, after all. 🙂

College can make or break you, but remember that God never will.

One reply on “The Importance of Community”

Hello..Larn, am touched seeing your blog. You are indeed called